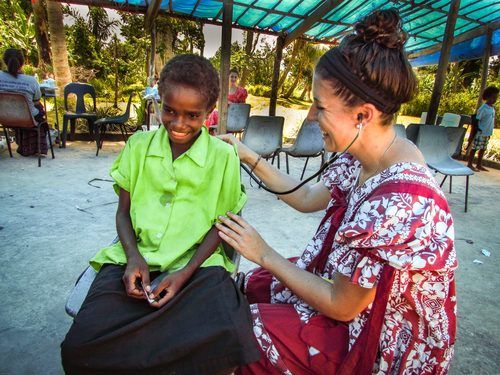 - Sally M.
“Now here is one more question that you can take home to ponder, 'What one thing do you want to bring back with you from your time away?'"

This seemingly simple question stirred the Lord to speak deep into my frightened heart. The ripples it created are still felt over two years later as I write this. This routine question helped me see that my stint in overseas missions was not disconnected from my current situation. The Lord had and would use it to prepare me for the mission field I was now entering…the workplace.

When I started my time in Youth With A Mission (YWAM), I was running away. Signing up for a five-month Discipleship Training School (DTS), I figured that would be plenty of time to get my life figured out. Yet the Lord chose to guide me through a plethora of decisions that kept me away from Canada for almost three years as I served on a medical ship in New Zealand and pioneered a clinic in Vanuatu.

During that time my heart was turned upside down, torn apart in the deepest ways, and then healed in the surpassingly beautiful ones. I fell in love with a breathtakingly good God and learned the joy of radical dependence. There was a time I never thought I would return to ‘normal life’, as seeking the guidance of the Holy Spirit and jumping from one adventure to the next, became the norm. But as the years passed, discontentment and yearning filled my heart.

One night, as I sat in Vanuatu gazing at the star filled sky, I cried out to the Lord and asked to go home. I knew then, it was the right question. That I was called to return to Canada and share God’s resurrection life to those in the nine to five workplace. More than that, I felt an ache in my heart to encourage and stir up a passion for prayer in the Canadian Church and to encourage them to wholeheartedly pursue the Lord.

My prayer was answered and within three months I was home. However, a fear was planted in my heart that I had taken the easy way out and simply got off the radical Christian train. Had I made up that calling to return home? It felt like I still had one foot in each world. I loved nursing in a developing country and intentionally discipling young people in the ways of God. Even though I knew I was supposed to be in Canada, my heart was disconnected and lost. But despite all of this uncertainty, I remembered my one constant was the Lord, so I cried out to Him.

Through a random Google search and a couple of divinely-led clicks, I stumbled upon YWAM Vancouver's Member Care and sent an email asking for help. A few days later, after a lengthy and healing discussion, a simple question was posed to me by a woman experienced in helping missionaries make sense of the transition back from the field. “What one thing do you want to bring back with you from your time away?” Thus, a pivotal moment was formed in my reentry process.

As I pondered my time in overseas missions, I realized there were two distinct things I never wanted to forget. The first is the truth that God is interested, involved, and active in the everyday. How life changing to come away knowing that when I pray the Creator is always listening! When I ask He will always respond. Secondly, to never forget how valuable relationships are. My time in a country that lacked wealth and put priority on people made me want to learn to stop amidst a task to see the person I was with. When I go about my life, my day, each interaction, I want to look with eyes changed by the Holy Spirit to see each person's unique and infinite value.

My prayer is to live a life on mission, wherever I end up, and whoever I am with.
Posted in Missions and Outreach
Tagged with author: Sally M., member care, missions, reentry, reflection