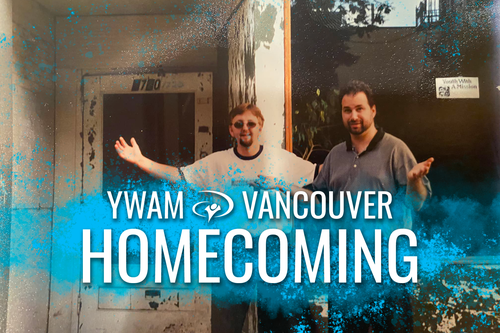 Since the start of the Pandemic YWAM Vancouver has had a more nomadic set up, with many of our staff working out of their homes. As a result, we have had an increased yearning for a place that is ours, where we can gather and work alongside each other in-person. As we searched for that space, we knew that YWAM Vancouver has been located in a few different places across the city in the last decade. Yet there is one area that we have continually felt drawn to. So we are excited to share with you that God has answered our prayers, and we are returning to Commercial Drive!
YWAM Vancouver moved into the Commercial Drive Neighbourhood for the first time, in 1993. We would call that neighbourhood home for the next sixteen years. Commercial Drive was a hub of youth and diversity and we couldn't imagine a better place for a mission called to serve the youth of the nations! In those early days on the Drive we focused heavily on our Vancouver Urban Mission Adventures program) which exposed countless groups from across the continent to what missions can look like in urban settings as they served around Vancouver. Later in 2000, we would also begin running Discipleship Training Schools, inviting students to also join in our ministry in the city!

YWAM Vancouver on Commercial Drive in the 00s.
As the 2010 Olympics approached, we were shifting gears to focus on the ministry opportunities that would open up when the nations arrived on our doorstep. Despite the call we felt to Commercial Drive, we couldn’t find a property or space that met our needs. So in 2009, we moved our operations to the Olympic Village in preparation for the Games. Even as we missed the connections and friendships we’d made on the Drive, we were thrilled to be a part of what God was doing in the Olympics. Our outreach was an incredible success and we saw many people come to the Lord!
Over the years, we have continued to feel God drawing us to the Commercial Drive neighbourhood. Since the Olympics, we have moved our office and classrooms multiple times. Each time, we researched and prayed and consulted with realtors and prayed some more, but we were unable to find a place on Commercial Drive that we could call home. But we’ve still kept looking.
And now, God has provided.
During this summer, we got back in touch with one of our old Commerical Drive  partners, Grace Church On the Drive. They had empty space on the store front level of their building that they wanted to fill, and we needed a space to rent for our offices. It’s the same exact rooms that we were located in during 1995-2000! Some of our old paint job is still visible!

We started moving in exactly one week before this is published. The excitement and joy is tangible as we celebrate this long awaited Homecoming.
We are excited to be here, on Commercial Drive, once again and we look forward to all that God has for us as we share and learn in this community! Please pray for us as we continue to discern how best to minister to the Commercial Drive community, and that God’s provision and guidance would be upon us as we do it!

How wonderful. In all my years in Ywam, running schools from Commercial drive kept our minds looking out ward to a world that needs Jesus and it made you the best base I have ever worked in

Such great news and we celebrate God's amazing breakthrough for YWAM in Vancouver.